*He has written 28 books and is currently working on two more to be published in the summer of 2022.
*His interests are the same as when he was in Kindergarten including robots and adventure.
*His first drawing was a picture of an Easter bunny that his principal hung in his office. That’s when he knew he would be an illustrator.
*In second grade, his teacher assigned a drawing and a story to go with it. He did a pirate ship story and realized he liked writing as much as drawing.
*He grew up in Ames, Iowa and went to Iowa State University.
*He thought he would be a cartoonist and drew comics for the college newspaper.
*His mother (a 3rd grade teacher) brought home a pile of picture books when he was in college and after seeing those, Anderson knew he wasn’t a cartoonist but an author/illulstrator.
*Author/Illlustrator jobs are hard to get, so Mr. Anderson gave this advice to the students:
1) Don’t be afraid to make mistakes.
2) You have to believe in yourself.
3) You can be anything. Above all, you need to work on your weakness until it becomes a strength.
*He described and demonstrated a draw-along with the students of how he creates illustrations.
*He showed that he has hidden pictures in all of his books and they all include the Iowa State Campanile among other things from his life.
*When asked, Mr. Anderson mentioned some authors that inspired him were Syd Hoff, Shel Silverstein and Maurice Sendak. 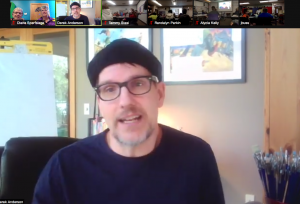 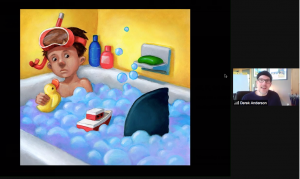